Hypochondroplasia and epilepsy: the neurological spectrum of FGFR3 mutations 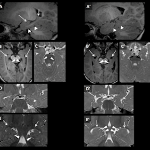 Phenotypically, patients present with a skeletal dysplasia resulting in short limbs and stature. Neurological involvement, however, is increasingly reported, including the presence of epilepsy and temporal lobe dysgenesis, expanding the phenotypical spectrum of FGFR3 mutations [3, 4, 5, 6, 7, 8]. Other FGFR3-related disorders include thanatophoric dysplasia, achondroplasia and Muenke syndrome, which can also present with both skeletal dysplasia and temporal lobe dysgenesis.

The case presented here is not novel but illustrates the neurological involvement in FGFR3-related disorders. First, through a review of neuroimaging findings, we review the molecular pathogenesis of cerebral dysgenesis in these disorders. Next, we provide an overview the neurological spectrum in FGFR3 mutations, with an emphasis on epilepsy and brain structural abnormalities.

A 6-month old boy presented with short stature. Pregnancy and delivery at 38 weeks were uncomplicated, birth weight was 3.2 kg (-0.75 SD), length 50 cm (-0.31 SD) and head circumference 36 cm (-0.12 SD). At 6 months, weight was 7.730 kg (-0.19 SD); length 64 cm (-1.31 SD), head circumference 45 cm (0.90 SD). With a paternal height of 173 cm and a maternal height 163 cm, the child’s calculated target height for age was 66.5 cm (-0.33 SD). A diagnosis of hypochondroplasia was made clinically, and confirmed radiologically, based on the rhizomelic shortening of upper and lower extremities, and short metacarpals, metatarsals, and phalanges.Genetic testing with conventional sequencing revealed a heterozygous c.1620 C>G variant leading to a p.(Asn540Lys) amino acid substitution in the FGFR3 gene. Parents were not tested.

At seven months of age, he developed focal dyscognitive seizures of approx. 30 seconds, consisting of behavioral arrest, decreased responsiveness, staring, oromotor automatisms and perioral cyanosis. Seizure frequency was erratic, with clusters of several in a day followed by none for weeks, with a near-complete response to oxcarbazepine.

Early developmental milestones were reassuring: At seven months he was able to sit independently, reached and transferred objects, was babbling and recognized parents and strangers. Family history was notable for a maternal history of febrile seizures.

On examination, he had mild frontal bossing but no other cranial dysmorphism. The general pediatric exam was normal, apart from limb shortening as described. Neurological examination revealed a mild head lag on horizontal suspension but was unremarkable otherwise.

Two routine electroencephalography (EEG) studies in between clusters were normal. 3 Tesla Magnetic Resonance Imaging (3T MRI) showed a dysplastic configuration of the medial temporal lobe, a malrotated hippocampus, and redundant sulci bilaterally. Figure 1 shows details of the temporal lobe dysplasia in the patient and compares them to a structurally normal brain MRI.

Our case illustrates neuroimaging findings typically seen in FGFR3. While the case itself is not novel, this case illustrates the molecular mechanisms lead to cerebral dysgenesis. Other FGFR3-related disorders can present with similar temporal lobe abnormalities but vary in severity and neurological phenotype as a result of the genotypic variety. – in an apparent dose-dependent effect.

FGFR3 is a member of a family of four FGF tyrosine kinase receptors [9]. Each receptor has a distinctive role in embryogenesis, childhood and adult life. During embryogenesis, the FGFR3 has a high level of expression in the cochlear duct and in the neural tube, while during childhood its expression is predominant in rudimentary cartilage in long bones during growth [10].

Two mutations account for the majority of cases of hypochondroplasia [2]: c.1620C>A and c.1620C>G, leading to a p.(Asn540Lys) change in the FGFR3 gene. This p.(Asn- 540Lys) mutation is also typically identified in patients presenting with seizures [5,8].

On MRI (Figure 1), our case shows bilateral temporal lobe dysgenesis typical for hypochondroplasia: abnormally triangular shaped temporal horns, a vertically orientated collateral sulcus, and an abnormally formed hippocampus. Mild ventriculomegaly in the setting of reduced occipital white matter, present in half of the patients in another study, however, was not present in our patient8. Previously described abnormal grey-white matter differentiation and immature myelination was also not appreciated in our patient [3, 4, 5, 6, 7, 8].

The MRI, in this case, is illustrative of the neuropathogenic process during embryologic development. Progenitor cells in the ventricular zone contain a protomap with predetermined plans for neocortical thickness and anatomy. This protomap is formed under the influence gradients of transcription factors, including FGF3, for which FGFR3 is one of the receptors [11, 12]. In hypochondroplasia, an activating FGFR3 gene mutation stimulates proliferation of these progenitor cells and suppresses apoptosis, resulting in a thickened cortex with redundant folds [11] (Figure 1A’ and 1D’). Higher caudomedial levels of FGFR3 expression explain why brain malformations are mainly seen in the mesial occipital and temporal lobes [12]. FGFR3 is also expressed in the hippocampal primordium, which indirectly results in a dysplastic but not enlarged hippocampus (Figure 1E’). Transcription factors from the cortical hem, another patterning center, normally contribute to the hippocampal formation but are suppressed by FGF [12].

Epilepsy in hypochondroplasia typically presents with focal dyscognitive seizures, which may secondarily generalize [3, 4, 5, 6, 8]. Seizure onset is in the first year of life, and about half become seizure free on medication, but case series are too small to assess the efficacy of specific antiepileptic drugs [3, 4, 5, 6, 7, 8]. A temporal clustering of seizures in hypochondroplasia has been described before, similar to the pattern that our patient displayed [5,8]. In Muenke syndrome, seizure types are similar but may be preceded by febrile seizures [17]. While temporal lobe dysplasia has been reported, seizures in Muenke syndrome have also been attributed to intracranial hypertension and perinatal hypoxic-ischemic injury [6,17]. In one case series, 4 of 7 patients with Muenke syndrome suffered from anoxia in the neonatal period [17].

Development is variable in the spectrum of FGFR3 mutations. In achondroplasia, intelligence is normal unless there is hydrocephalus or inadequately treated hearing loss [15]. In hypochondroplasia, language and attentional problems are common [8]. With Muenke syndrome, however, 40% of patients have intellectual disability likely due to FGFR3 mutation- related brain malformations [16]. Cranioplasty does not alter the cognitive outcome and patients not needing surgery have a comparable intellectual function, too [16]. The longtime survivors of thanatophoric dysplasia have severe intellectual disability, are non-verbal, non-ambulatory and are not able to perform activities of daily living such as toileting, bathing, dressing and feeding [18].

Our patient featured a classic orthopedic and neurologic phenotype, albeit neurologically mild, with age-appropriate development and good control of seizures to date. Through a detailed review of the neuroimaging findings and we illustrate the neuropathogenic process of temporal lobe dysplasia in FGFR3-related disorders.

With this case, we want to raise awareness and provide insight into the mechanisms of childhood epilepsy in hypochondroplasia and other FGFR3-related disorders

The authors are thankful to the patient and his parents for their permission for to use their information in this manuscript.

The Boston Children’s Hospital & Harvard Medical School IRB does not require a formal IRB for a case-report. Nonetheless, we have parental permission on file.

Hypochondroplasia is a disorder caused by FGFR3 mutations, commonly featuring short limbs and stature. Thanatophoric dysplasia, achondroplasia and Muenke syndrome are genetically related conditions with skeletal dysplasia and temporal lobe dysgenesis. We present a 6-month old boy with hypochondroplasia and epilepsy. His brain MRI revealed bilateral temporal lobe dysplasia, with redundant sulci and a rotated hippocampus. The neuroimaging findings of our case provide direct insight in the pathogenesis of the cerebral dysgenesis in FGFR3-related disorders. In addition, through this case we review the neurological spectrum of FGFR3 mutations.

Division of Genetics and Genomics